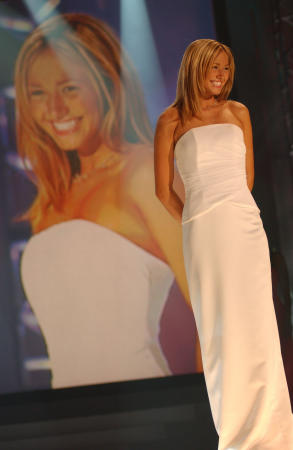 OREGON MAINTAINS ITS STRANGLEHOLD!!!! Oregon was the only state to have won Miss Teen USA twice and now they have won it three times! Way to go, Oregon! I do approve highly of the winner too especially since she mentioned Bridget Wilson (Miss Teen USA 1990) in her close-up interview. This girl knows where she comes from!.

This year, the intros were well done. They made Palm Springs look like lots of fun. Mario Lopez and Brooke Burns were both great hosts. Mario wasn't quite as good as he was back in 1998 but he still did well. Brooke Burns was excellent. Not only is she gorgeous with an amazing body but also her smile is genuine and she just seems like the nicest person who doesn't let her beauty go to her head. Of course, I liked the highlights of the previous year's titleholder. As for that titleholder, Vanessa Semrow, she still seems like a regular girl who almost comes across as if she didn't really care that she was Miss Teen USA.

In regards to the semifinalist choices, that was an odd top 15. What are they doing to Miss Teen USA?? I don't know even know what they're judging anymore! You'd have better luck picking names out of a hat! I got 6 of the 15 plus 1 alternate and 2 honorable mentions so I'm pretty disappointed but I am happy with the winner. So what happened to my girls that didn't make it? Well, lately predicting Miss Teen USA has proved to be an exceedingly difficult task. Recently, the winners have popped right out of nowhere. For example, in 1999, the winner was 43rd on my list, in 2000, the winner was 32nd on my list, in 2001, the winner was 10th on my list and in 2003, the winner was 30th on my list so it seems like the one to pick these days seems to be among the least likely suspects. They are looking for a regular teen not the glamorous queens of yesteryear. DC gave a nice performance. Her first pictures were striking and she seemed to have performed quite well yet she was denied. Florida was my overall highest-ranking delegate. She certainly did everything right in my opinion but it may have come as too polished and too pageant patty. Missouri performed well in swimsuit and gown. Kansas had a supreme body but her gown choice was a disappointment. New Hampshire looked very fresh and teen but she was denied. The home-state girl, California looked like a Disney-princess in gown. Nevada, despite being only 15 looked very polished and strikingly beautiful. New York was spunky and Virginia, in spite of sending great delegates for the past few years, has constantly been tossed aside. I really hate seeing mediocre competitors getting spots over refined, polished girls but real "teens" just aren't like the polished ones so it makes Miss Teen USA extremely difficult to predict. 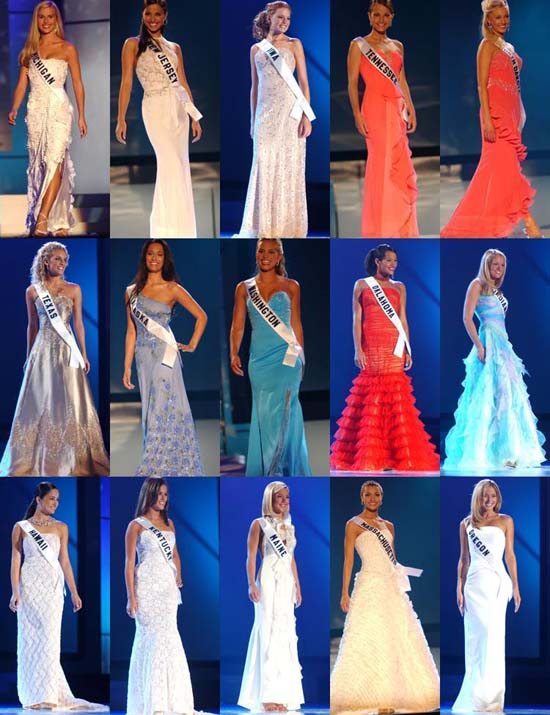 After the announcement of the top 15, we were forced to sit through American Idol's Justin Guarini's little number. I don't like to get started on American Idol, but since it came up my pick for that year was Tamyra and for this year, I liked the two Kimberlys (Locke and Caldwell). Locke truly nails her songs. Okay, enough about that, now on to the evening gown competition beginning with Michigan. She kinda dragged the floral piece attached to it sloppily along but she looked nice. New Jersey's gown was very nice. I thought it might hurt her chances because it didn't look very "teen" but I'm glad it didn't. Iowa walked too fast in a gown that looked unflattering. Tennessee's gown made her look like she was pregnant at times. The color looked good on her though. North Dakota's pink ruffled gown was unique but not stunning. Texas had my highest-ranking gown this year. It was a lovely silver ball gown, which I'm sure, was inspired by Nicole O'Brian who also wore a silver gown at Teen 2000. It was easily one of the best gowns and Tye's hair also looked gorgeous so I was shocked that she didn't make the top 10 because she was a vision. Alaska's gown was a lovely shade of blue and it showed off her great form. Washington's blue gown was interesting but mainly all you could see was large hips. Oklahoma's snazzy red number was carried well and she had a nice stance but she was not the Vanbros girl I was expecting to see up there this year. She also should have advanced to the next round. Indiana's gown looked like an exploded cotton candy machine or shades of cotton candy tissues stuck to it but it was certainly unique. Hawaii and Kentucky looked like their gowns were made of similar material. Hawaii had a nice necklace but Kentucky's gown looked a little stiff in some areas. Maine's gown with ruffles hanging from it was okay and she was a nice surprise to see in the top 15. Massachusetts' whip cream or birthday cake frosting gown was certainly teen but I was hoping this gown wouldn't hurt her and of course, it didn't. And finally, Oregon completes the competition with a very simple white gown with obvious wiring at the breasts. 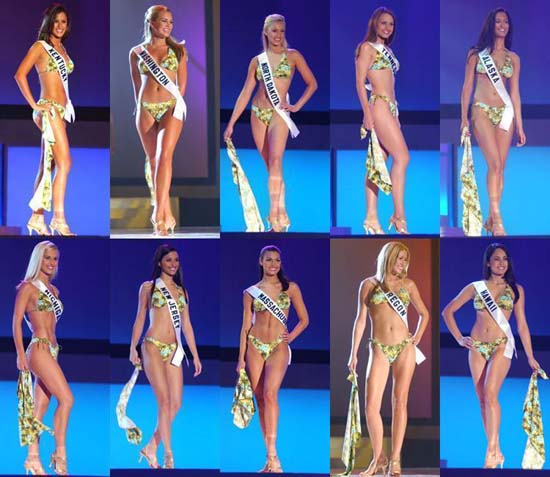 On to the swimsuit competition which saw Kentucky looking pretty good overall. Washington, on the other hand, had a very distracting walk, again with lots of hips. I did say that delegates should walk to be noticed but Washington's walk didn't look right. I was surprised that she advanced instead of Texas. North Dakota looked okay as did Tennessee. Alaska's body was nicely toned particularly at the arms and legs. Michigan was quite short with stubby legs but nonetheless, she was in excellent shape. New Jersey's arm swinging was annoying. Massachusetts had a great body with lovely abs. That line from the sternum to the belly button is a clear sign of great abs. Oregon didn't necessarily have the best body but she looked comfortable in her own skin and of course her smile must have helped. Hawaii also looked okay. 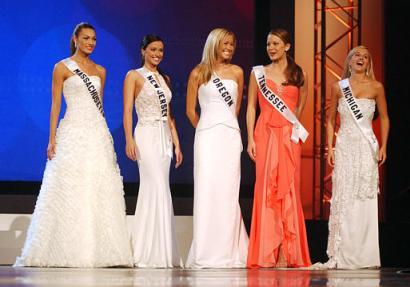 After Oregon won Congeniality and New Jersey won Photogenic, the top 5 advanced (Massachusetts, New Jersey, Oregon, Tennessee, and Michigan.) During the informal question round, we learned that Massachusetts' favorite activity is baton twirling. She can even do a little fire like the sexy dance from the movie "Miss Congeniality" and she says she has never lit herself on fire. She would also like to have Katie Couric's job since she wants to be a broadcast journalist and sitting next to Matt Lauer would definitely be a plus. She seems very comfortable on stage and of course, she has a great broadcast voice. New Jersey talked of her twin sister who looks very different from her. The twin has blond hair, green eyes and is slightly shorter and New Jersey talked of the craziest thing she ever did which was slipping her phone number to Ashley from her favorite group of the time O-Town (wonder where they are today??). Oregon gives Mario a big hug and Mario seemed to have really liked that and she was asked about the challenges she faced being on an all-male baseball team. She said that being the only girl made her a target but once she hit her grand slam that shut them up. The whole tomboy thing really seemed to work in Oregon's favor. She also raised ducks in her bathtub and later moved them out to a pond on her farm, to which Brooke Burns replies that there are only rubber ducks in her bathtub. The art forms that Tennessee most likes to display are paintings and her favorite movie is "The Goonies" and Sloth is her favorite. I don't remember anything about the Goonies except that Cyndi Lauper had a song on the soundtrack. Michigan's favorite singer is Celine Dion because she's a good role model and an awesome singer and she talked about her work with the Pontiac Rescue Mission where she met two homeless boys that her family adopted and bought presents for them. 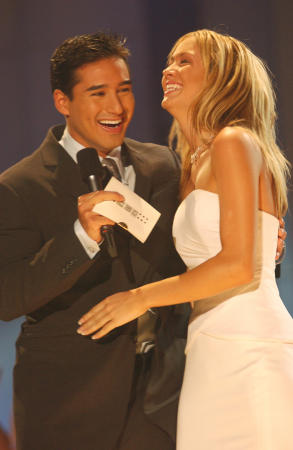 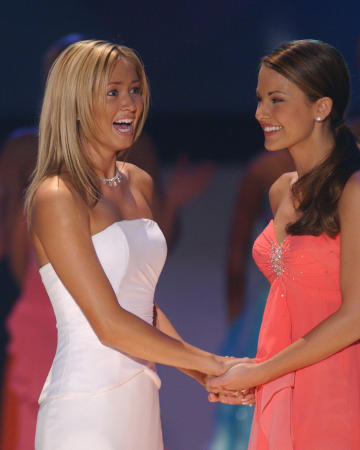 For the final question, Massachusetts picked New Jersey's question which asked what qualities she looks for in a best friend. Massachusetts looks for sincerity, honesty and personality and you have to have fun with friends so personality is especially important. While it was decent answer, it seemed to have got washed out and forgotten because that's such an overdone question. New Jersey picked Oregon's question asking what her definition of beauty is. She said beauty is within and also the exterior but when you look at someone's eyes, the inner glow is their beauty. Oregon picked the reigning Miss Teen USA's question, which asked, "If you could get your generation to do one more thing, what would it be and why?" Oregon said that technology-wise, we have come a long way but she would like teens to believe in themselves to avoid drug problems and everything like that. The audience really seems to applaud loudly for her as the night went on. Tennessee picked Massachusetts question which asked how growing up in her state has influenced who she is today. Tennessee immediately reminded us of southern hospitality and she says she is hospitable and nice and that influences the way she treats others and acts in everyday life. Finally, Michigan picked Tennessee's question asking what the one thing is in life that inspires her the most. Michigan replied that going out in schools and the community and seeing people that need help inspires her to help them like the Pontiac Rescue Mission so what inspires her is helping others. Yes, it was a bit of a throwback to what she said earlier. Michigan really seemed focused on talking about her charitable works. 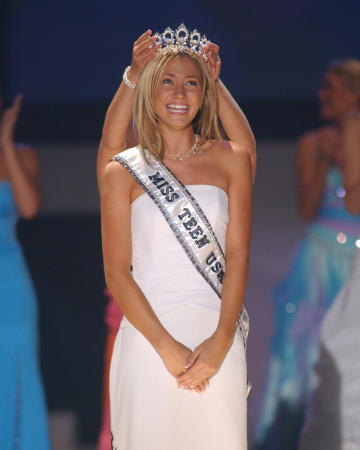 After Vanessa Semrow said her farewell, New Jersey was fourth runner-up, Massachusetts was 3rd runner-up, Michigan-2nd runner up, Tennessee-1st runner up and Oregon's Tami Farrell was declared Miss Teen USA 2003. I must point out that of the three crowns in the Miss Universe organization, I think the Teen crown looks the nicest. The similarities between this and the 1998 pageant are interesting to note. In 1998, Mario Lopez was the host and in that year Miss Congeniality also won Miss Teen USA and that woman, Vanessa Minnillo was a judge this year and in both 1998 and 2003, Tennessee was the 1st runner-up. Congratulations to Tami and of course to Oregon for claiming its third Miss Teen USA title! 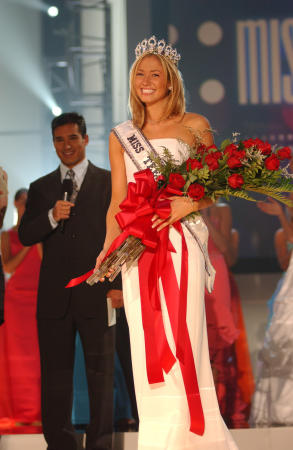 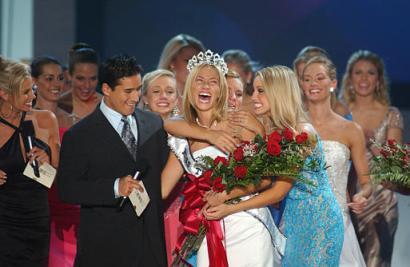