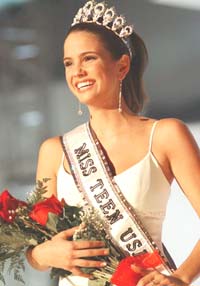 Before talking about the pageant itself, I wanted to mention two other pageant-related items. As the Miss Teen USA delegates were preparing in Palm Springs, the pageant world was rocked by the disturbing news of the untimely death of Miss India 1997 and top 10 semifinalist at Miss Universe, Nafisa Joseph. Nafisa gave a memorable interview at the 1997 Miss Universe pageant in which she stated that the greatest injustice in the world today was to bring a child into the world and not being able to offer him/her peace. How ironic that Nafisa herself never brought a child into the world. After becoming a successful MTV VJ in India, Nafisa accomplished so much and yet she committed suicide by hanging herself from a ceiling fan due to an argument with her fiancé. May Nafisa rest in peace. 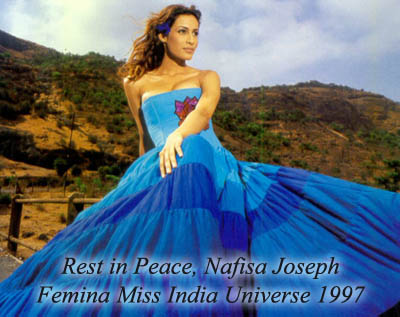 The second pageant related item I wanted to mention was "The Amazing Race" starring two pageant celebrities, Christie Lee Woods (Miss Teen USA 1996) and Nicole O'Brian (1st Runner Up to Miss Teen USA 2000 and 2nd runner up to Miss USA 2003). Christie competed for the Miss Texas USA title three times and unfortunately became the first Miss Teen USA who was unable to win her state title to compete at Miss USA. Many pageant followers felt that Christie should have won Miss Texas in 2002 and the following year at Miss Texas, Christie was defeated again and the crown went to Nicole O'Brian. I felt bad for Christie when Nicole won first but the final results of the Amazing Race turned the table on the two ladies as Christie and then boyfriend, now fiance Colin came in second place in The Amazing Race just ahead of Nicole and her boyfriend Brandon, who finished third. Christie and Colin came in first for most of the episodes and won several trips to exotic locations around the world. Colin proposed to Christie on a morning show shortly after the Amazing Race finale. Also among the competitors for this edition of the Amazing Race was Erika Shay who was Miss Pennsylvania Teen USA 1995 but she was eliminated early in the competition. 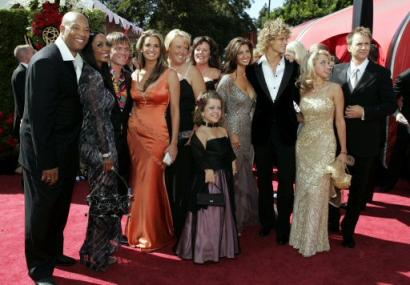 Now on to the Miss Teen USA 2004 competition which had a very similar format and look to the previous year's competition. Here were my predictions compared to the final results.

So I got 10 semifinalists plus 1 alternate and 1 honorable mention, which was a lot better than I was expecting! The three that I missed were Minnesota, Nevada and South Carolina. Congratulations also to Nebraska for making the semifinals for the first time! Montana is now the only state that hasn't made it at Miss Teen USA. This year had much better picks than some recent Miss Teen USA pageants which had very nonsensical choices but this year's prelim judges did a good job.

As for the hosts, it was great to see Vanessa Minnillo, Miss Teen USA 1998, doing a great job hosting the event with Tony Potts. Vanessa has become one of the more popular Miss Teen USAs doing hosting jobs for MTV and other high profile networks. The reigning Miss Teen USA, Tami Farrell when appearing during this telecast looked much better all glammed up. Also among the judges this year were Miss Teen USA 1994, Miss World USA 1998 and 1st runner up to Miss USA 1998, Shauna Gambill and Miss Tennessee Teen USA 1999, Rachel Boston who currently appears on the show 'American Dreams' playing a character named Beth. Another pageant veteran who plays a character named Beth is the dramatically different looking Kelli McCarty, Miss USA 1991 who plays that character on the soap opera, "Passions". If it hadn't been brought to my attention, I never would have known that was Kelli. 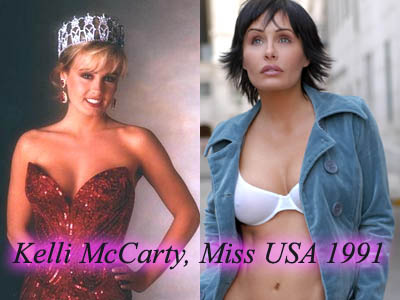 And now, the gowns. First up of the top 15 was Georgia and she was wearing the type of gown which has become known as the Shandi knockoff, reminiscent of the two-color, two-layer style of gown that Shandi Finnessey wore when she won Miss USA 2004. This style of gown has been copied and worn in several other pageants this year but only Shandi could carry it the way she did. This just goes to show that what works for one pageant contestant doesn't necessarily work for another. And then comes the old adage, it's not about what you wear but how you wear it. New Jersey wore a purple gown reminiscent of that worn by Miss Oklahoma Teen USA 1997, Amanda Penix. Hawaii wore one of the better gowns in this competition. The leopard print looked great. Missouri wore another Shandi knockoff gown with what looked more like a blue danish stuck to her hip than a flower. Alabama wore a simple, white, one-shoulder gown. Usually, white gowns are pegged as the safe and not really daring or original gowns but I think this gown looked great with Terra's skin tone. New York wore a salmon-pink gown that could have been better. I'm not really a fan of salmon. Louisiana had another white gown with an annoying ribbon running down the center that I probably would have taken off because it didn't flow nicely with the gown. This was the gown of the winner and it's interesting to note that white, pink and light pastel colors have been the colors of the gowns of the several Miss Teen USA winners except for 1984, 1990, 1991 and 1992. Texas followed in a strapless white gown that was forgettable but then here comes Maryland in a bold, fiery, daring, vibrantly ruffled gown combined with the graceful moves of a ballerina making for a sensational gown presentation. Nevada had another simple white gown. Tennessee had a dark pink ball gown and she worked it well. South Carolina's gown really accentuated the flaws in her figure particularly the paunch in lower stomach. North Dakota wore the typical teen princess gown which some would say has become a little too cliché in teen pageants. Nebraska really impressed me during the competition. I really took a liking to her and actually wished I ranked her higher in my predictions. Minnesota wore a flower adorned gown but I wasn't really impressed. 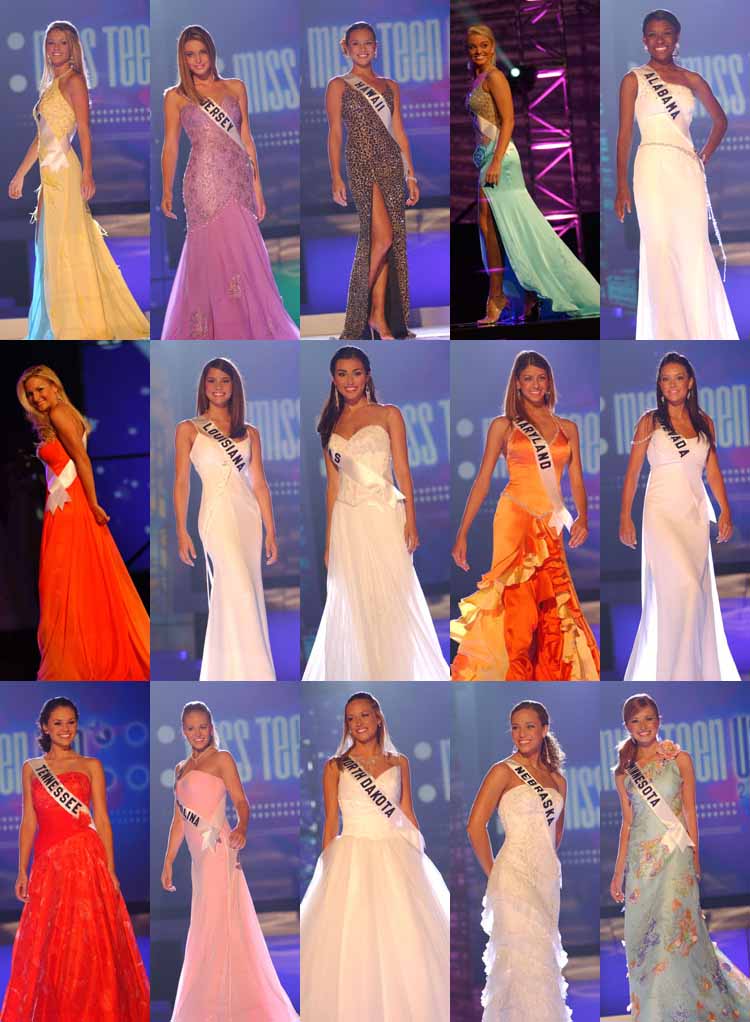 The performances of JC Chasez and Brandy were actually pretty sad to watch. JC's song was slow and boring and I once thought he had the potential to be a bigger star than Justin Timberlake...not so. And Brandy is also hurting to get the fame she once had. Once promising talent fades again into obscurity.
For the swimsuit competition, the camera angle wasn't really that great, it seemed to make many of the delegates' legs look stubbier. Tennessee looked good. New Jersey was not as defined. Alabama was just okay. Nebraska looked great and had good moves on stage. New York had great abs. Louisiana set herself apart by spreading her legs and make some suggestive pelvic movements and I loved it because it was so unique. Nevada was fierce. Hawaii worked it in spite of her height. I didn't really understand why Minnesota advanced to the top 10 but she was okay. Maryland followed an had a great dancer's body. 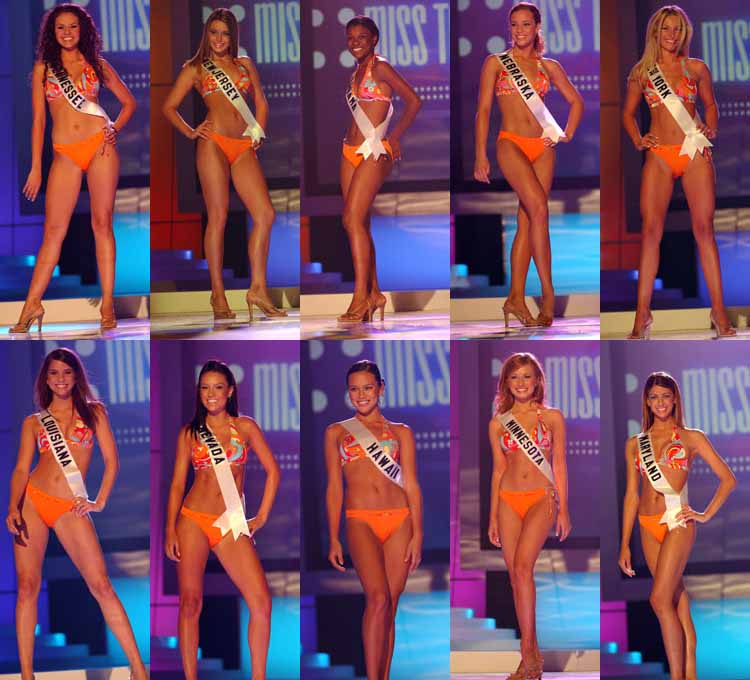 After North Dakota won Congeniality (so interview must have helped her get in the semis) and Arkansas won the Internet vote (oops, I mean Photogenic), the top 5 were announced. First up, Nevada talked about why her brother is her hero. It's because he's in the U.S. Air Force putting his 'line on the life.' Instantaneously, the entire audience, especially myself, just shuddered and cringed at this misplacement of words or malwordage, if you will. Louisiana talked about being a baseball fan because she says the players look cute in uniform. On the night before she left, she talked about hanging out with friends and how they had a send-off party for her. Maryland talked about her fondness of Betsey Johnson's crazy fashion designs complete with feathers and what not and said she would first talk to her parents if she won because they were her big supporters and she blew a big 'mmwwa'kiss to them. Hawaii talked of parasailing in Tahiti which was a great experience for her because she was so high that she couldn't hear the boat and loved seeing the mountains. The aspect of the pageant that most surprised her was the lack of free time due to rehearsals but she nailed her camera shots. Finally, Tennessee was asked to speak of her love of music but when asked to name a specific genre or song, she would say that she just likes all types of music depending on her mood and she had no time to listen to music during the pageant but had a wonderful time. After hearing these interviews, I was more convinced than ever that the level of intelligence displayed by today's Miss Teen USA contestants shies significantly in comparison to the delegates of the previous decade. 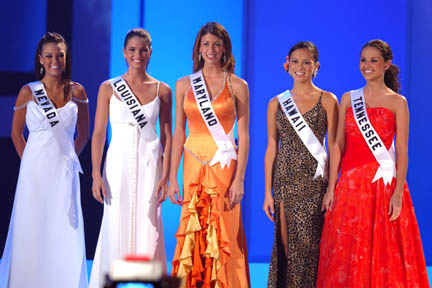 For the final questions, Nevada picked Hawaii's question asking what book influenced her life and why. Nevada chose the Great Gatsby because he lived life hiding his true self and wanted people to love him for who he wasn't with expensive cars/clothes but we should love ourselves on the inside and that will spill over to everyone else. It was a bit of a redeeming answer from her previous fumble but not by much. Louisiana picked Tennessee's question asking if our future is determined by choice, chance or destiny. She said 'choice' is definitely the answer. The only way to see where you're going is to make the right decisions and if you make pathetic decisions then you'll never get anywhere. It was a decent answer and you can almost never go wrong with the word 'choice'. Maryland picked Louisiana's question asking what a teen's greatest weakness or temptation is. Maryland said peer pressure and that we should look up to our parents to move past all this. Another decent answer. Hawaii picked reigning queen, Tami Farrell's question asking what she would do if she was elected president. She gave a potentially controversial answer (if there were some fast food sponsors) saying that she would work with the FDA to ban fast food restaurants which she feels are hurting us with their addictive french fries and she jokingly bets they put something in them to make them addictive. It was an almost naive but very teen answer, that likely helped propel her to the first runner up position. And finally, y'know, I was y'know listening y'know to Tennessee y'know and y'know she was y'know answering her y'know question y'know. Y'know?????? Note to future delegates, please listen to yourself speak and catch these bad speech habits! Tennessee picked Maryland's question asking if technology was taking away from children's ability to be more creative. While incorporating seven 'y'knows' in her answer, Tennessee talked about how her 9 year old brother plays video games and that some are bad but other games can teach and she concluded her statement with some incomprehensible mumbling to finish an already weakly delivered answer.
At the finale, y'know Tennessee was 4th runner up, 3rd runner up was Maryland (say what?), 2nd runner up was Nevada, 1st runner up was Hawaii and the new Miss Teen USA was Louisiana's own Shelley Hennig. I thought it was cute how at the last moment, when asked if they were ready, Hawaii nodded her head yes while Louisiana shook her head no. This is Louisiana's first win, they were 1st runner up in 1999 and their representative in 1990, Ali Landry became Miss USA in 1996. Congratulations Shelley on a job well done. 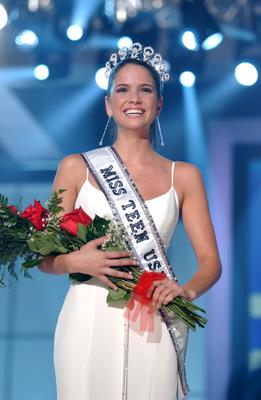