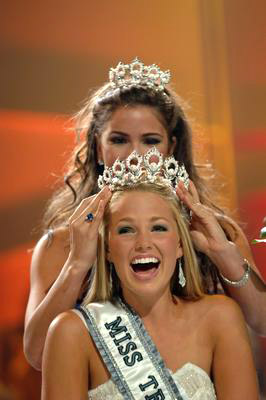 Great choice for Miss Teen USA 2005...Allie Laforce of Ohio! At least we didn't get an out of the blue winner like so many years before. This is actually the first time since 1997 that the winner of Miss Teen USA was actually in my top 5 so obviously I'm ecstatic. Also for the state of Ohio, seeing how in the history of Miss Teen USA, Ohio surprisingly only made it once prior to this year and that was in 1993 thanks to Melissa Yust. However, Ohio has won the Miss USA title twice and of course this state has given us the one-and-only Halle Berry who was Miss Teen All American in 1985 and 1st runner up in Miss USA 1986 and a finalist in Miss World 1986...and oh yeah, there was those other awards like Oscars and Emmys and Golden Globes, oh my! Maybe Allie Laforce is Ohio's next pageant-crossover celeb!

The format of the show was pretty much the usual format compared to the last few years that we've been on NBC. The hosts this year were Galen Gering who stars opposite former Miss USA Kelli McCarty on the hit soap opera "Passions" and of course Miss USA 2003, Susie Castillo who also competed at Miss Teen USA 1998 but surprisingly was somehow overlooked that year. Susie now does hosting duties on MTV and it's really great to see how she and fellow Teen 98 graduate, Vanessa Minnillo went on to do great things. Vanessa, of course, won the Miss Teen USA 1998 title and hosted the pageant last year and can now be seen on Entertainment Tonight so the Teens of 98 were definitely among the best. Susie did a great job as host. I was very impressed. Galen, on the other hand, I think was trying a little too hard. It almost sounded very unnatural for him to speak loudly particularly since his character has a softer, more suave kind of voice. His little "reaction" to winning was not necessary. He didn't pull it off as well as Tommy Davidson did at Miss USA 2001.

As for my predictions this year, I got 9 out of 15 plus 2 alternates and 1 honorable mention. The 3 that weren't in my list were Michigan, Minnesota and New Mexico. So What happened to my girls that didn't make it? I thought it was interesting to note that Massachusetts and Mississippi were both in my list, yet the two girls in between them (Michigan and Minnesota) were the ones who advanced. Hmmm...maybe a case of crossed scores? I must say that I was very surprised to Minnesota in the top 15. Both Massachusetts and Mississippi had very fresh looks but maybe they came across as trying to replicate Shelley Hennig, last year's winner, and the same goes for Florida, who also wore the similar gown to Shelley's. Texas usually doesn't get overlooked. Don't know what happened there this year. Colorado had those distinct curls and just a real teen look. It worked for her but it was a hit or miss kind of look. Indiana was great though, I really would have liked to see her in the top 15 at least. She had a vibrant personality and appearance in the little trip take segments and her preliminary presentation was also great. So here's the breakdown of the list.


As for our little performances from Aaron Carter and Kimberly Locker. Aaron's performance was probably the most off-key nasal-sounding mess I've heard in a while. I know it's difficult to do wild dance moves and sing at the same time but I've seen other artists pull it off much better. Kimberly Locke was great. She was one of my picks to win American Idol in her winner so I was glad to see her. She certainly hasn't lost any weight though. I heard she under contract with some clothing company for full-figured people so that she can't lose weight.

Now on to the evening gown competition, beginning with California in a blue gown that you couldn't really say anything bad about. Virginia was next and I really liked this gown with the see-through areas and the flowers. Some people may have thought this gown was too "Miss" but I think the reality is that most teens don't want to look like "Teens," I think they would much rather look mature and sophisticated, yet elegant and sexy. I liked Maryland fiery red salsa number. I was very surprised that she was eliminated this early especially since she had such great stage presence. I also think it would be nice to see a winner in a darker gown color. I believe the last winner that had a darker colored gown was Charlotte Lopez back in 1993. Next was our winner Ohio in a great fishtail gown that reminded me a lot of Miss Cyprus 2002. Illinois wore a blue gown that seemed to purposely have the reverse cut out from her predecessor of 10 years, Anne Marie Dixon, who in 1995 wore a similar gown with cutouts in the other parts of the stomach. New Mexico had a white gown and it flowed nicely but I didn't think she should have advanced over girls like Maryland or Kentucky or Alaska. West Virginia's gown was a really great choice. It had that unique green color and the cuffneck gowns always look great. Minnesota had some odd arm swinging going on and clearly did not belong in the 15...how she made it there will remain a mystery...maybe the judges liked her last name "Hindi". New York had this Paris Hilton wannabe-look going on. Perhaps this scored points with judge Kathy Hilton. Kansas' yellow flowery gown was nice and unique and certainly showed off her breasts. Oklahoma's gown was a really nice take on the layered gown now made famous by Miss USA 2004, Shandi Finnessey. Kentucky had a great white gown with a brown belt. She definitely should have advanced. I think much of Michigan at first but then I saw her toss the skirt like nobody's business and just like that she became a favorite. Alaska was your classic pageant girl with very controlled movements. And finally, Georgia came out looking Georgious in a white version of the gown Shandi Finnessey wore at Miss Universe.

As for the swimsuit competition. Ohio's long blonde hair complemented her toned body nicely. West Virginia also had a great body and overall look, almost like a sophisticated broadcaster. Virginia clearly had the best body of the competition. Great definition. Kansas looked noticeably heftier than the rest. California was nicely done and had an all around great look. Georgia looked good too in spite of her height and you gotta love how that yellow bikini looks on her tanned skin. New Mexico's presentation was a little much. She was clearly done here. Oklahoma had a certain serenity that I liked. It was quite pleasant to watch her. Michigan was certainly tall and height means long legs. Some taller people can look a little gangly though and she kind of leans toward that area but she did work it well. Finally, Illinois shows us that scar as evidence that she's a cancer survivor. She certainly has nothing to hide, in fact, the scar most likely worked in her favor. 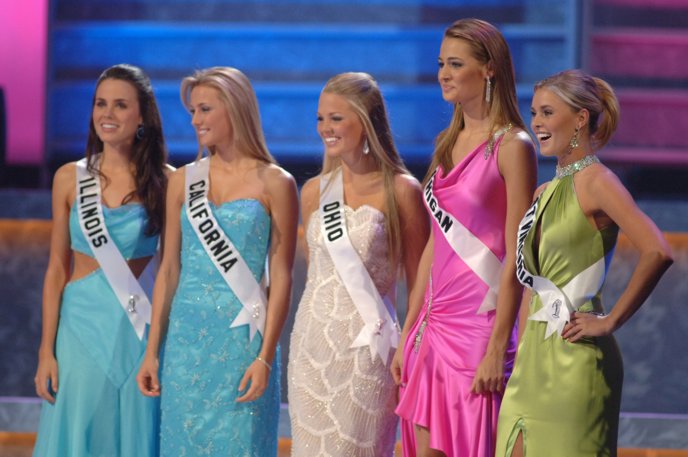 After Kansas won Photogenic and Missouri won Congeniality, it was time to announce the top 5. Illinois was up first and talked about take road trips with her family and singing silly songs to pass the time. California talked about living with a family in Spain that spoke no English and that it stretched her out of her comfort zone but she definitely picked up more Espanol. Ohio, at age 10, was the only girl on an all-boys baseball team and spoke of scoring the winning run on a game that others were ready to give up on. I know, I know...the winner being once-a-tomboy-turned-pageant-queen story is a little played out but anti-pageant-pattiness seems to become an overbearing consequence to the public that wants what it wants. Michigan talked of her attempt to fly like Peter Pan and jumped off some stairs and has the scar to prove that she couldn't fly but she blames it on forgetting the pixie dust. Cute and original. Many people really started to take a liking to Michigan more and more throughout the competition. West Virginia talked about skating on her neighbor's unfinished house. When the neighbor's truck drove by, she and her friend fell on the same patch of ice and they made their way to the garage, hid there and went uncaptured...until of course, she revealed it on national TV. I skated on some unfinished houses back in my day too, oddly enough, and I'm sure others have too which scored her points in the I-can-relate-to-her department. 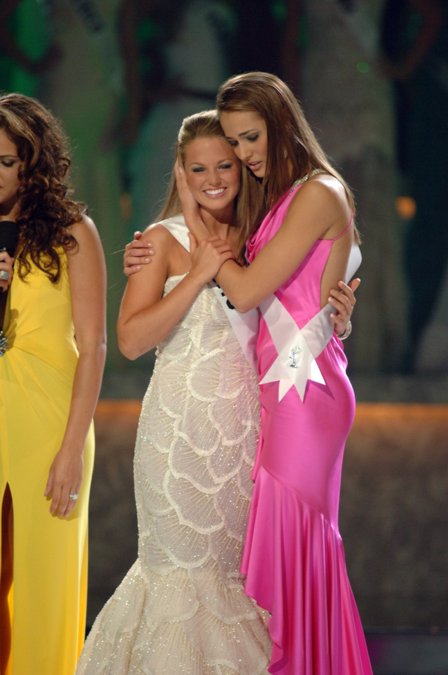 Finally for the final questions, Illinois chose West Virginia's question asking why high school years are known as the best years of your life. Illinois replied that she remember her freshman year, meeting the seniors and joining marching band and starting relationships and joining marching band and jazz band and forming strongest friendships and joining marching band and choir and joining marching band... On to California, who picked the reigning Miss Teen's question asking if our generation is growing up too fast. California replied that she didn't believe so but that teenagers are gaining more maturity and she thinks that's a good thing because we are the promise for the future. I thought it was a decent answer. Ohio picked Michigan's question asking how we get the younger students to understand the importance of education. Ohio replied that to get a job and prosper in the future, you need education. Education is with you no matter what, on your resume, during people skills, during getting a job. People look at you and they can just tell that you have an education. We got the gist of this answer (the "Carole" gist of this answer...What? Should have stopped at gist? Okay, will do next time.) and so we knew what she was trying to say and that it was good. I think she pretty much had it won already anyway. Michigan picked Ohio's question asking if you could be someone else for one day, who would it be and why? Michigan is content with herself and she said everybody might say that but it's true that she developed a great personality and identity and likes her own skin. Nicely done, Michigan! Some might dub this a cop-out answer but it was well explained! West Virginia picked Illinois question asking what do you spend most of your time thinking about. A rather provocative question if I do say so myself. West Virginia replied that she thinks about what she's going to do next. She never knows what she's gonna do and she's very spontaneous so that's it. Yeah. 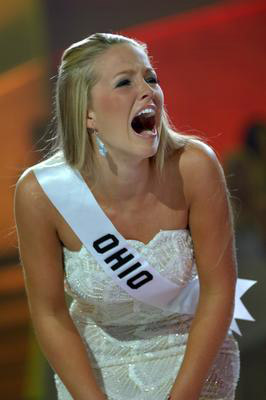 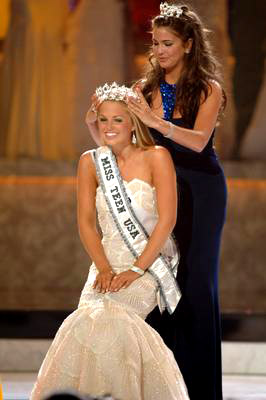 Shelley Hennig really looked great throughout the pageant and also at her farewell and then we came to that all-important moment of truth. 4th runner up is California, 3rd runner up is Illinois, 2nd runner up is West Virginia and the final two are two good friends, Michigan and Ohio with a really dramatic moment of suspense filled with hugs and tears and jumps and touches and then Michigan is proclaimed 1st runner up to the elation of Ohio's Allie Laforce who comes to the full realization that she is now the reigning Teen Queen!
Well done, Allie and may "La Force" be with you! 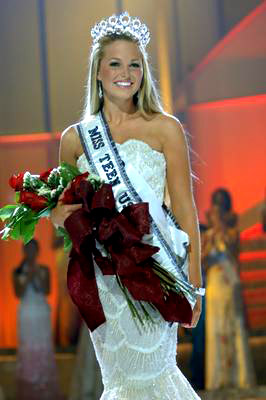