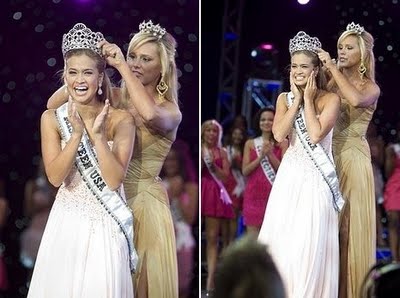 It's like someone pulled a rug out from under me! What? Miss Teen USA happened? Sigh. It turns out that I was just on vacation and had very limited Internet access but I have returned to discover that a new Miss Teen USA has been crowned and I wasn't even aware it was happening. This is the first time I wasn't able to make any predictions for a pageant since starting my website 11 years ago. I guess it caught me by surprise because for the first time since 1986, the Miss Teen USA pageant was held earlier than the Miss Universe pageant. The winner was Tennessee's Stormi Henley. Tennessee has now become the 2nd state to win more than one Miss Teen USA title since its inception in 1983. Oregon has won 3 times (1988, 1990 and 2003) but no other state had won a second Miss Teen USA until Stormi did it for Tennessee.

The pageant was held on July 31 in Nassau, Bahamas. The event was hosted by Miss USA 2008, Crystle Stewart and Seth Goldman. I caught a few clips of it on YouTube but sadly I really don't really have much to say about it. I will just quickly run over the top 5's questions. Georgia was asked about text messaging and how it leads to less face to face time and whether she thought it was good or bad. She said she saw both sides with the good being that technology increased and society is updating but it wouldn't hurt to actually see a person. California was asked if parents are accountable for a child's obesity. She replied indicating that she loves the Food Network and wants to be a teenage chef appearing on a show and she says it is ok to eat healthy and people need to become educated on healthier foods. Louisiana was asked as a young person, how she feels about the direction the world is heading in. She said it's a good point for the younger generation. Going fast and forward. Tennessee was asked if it was better to be formally school educated or street smart. She said street smarts will help you go anywhere in life. Being smart in books will only help you so far. Obviously, the judges agreed with this answer and I also wish I was more street smart than book smart. Maryland was asked who she felt was the greatest U.S. president. She said she can't say Obama because he's not done yet but she went with Bush. Then the audience responds negatively and she quickly defends her choice saying some don't support him but he made the decisions he made when September 11 took place. Sigh. Asking a teen given their lifespan who the greatest president was is probably not a great idea unless they really know their American history but Bush???? I prefer the Mikimoto crown over the new one and of course, nothing ever beats the original. I honestly don't know who I would have gone with because I just wasn't following Teen closely at all this year. I know California was talked about heavily but Ohio made a really strong impression on me and being that she is the sister of Miss Ohio Teen USA 2003, chances are pretty high that we may see her competing for her state Miss USA title. 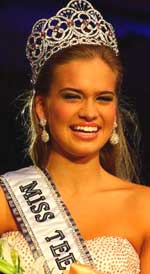