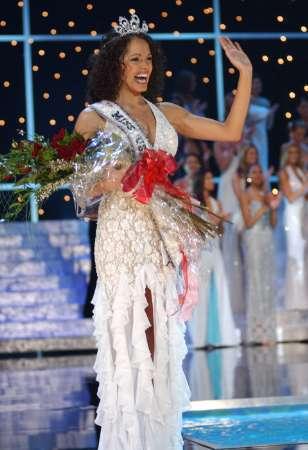 Our debut on NBC was a hit! We had the highest ratings for Miss USA since 1999 and bravo to NBC for thinking of having a special Fear Factor episode featuring Miss USA delegates! Congrats to Miss Louisiana on winning the Fear Factor show! The delegates had to hang upside down under water for as long as they could, dive in a fish scaly pool and find fermented squid and drink it (blech!) and try to walk across the top of a speeding truck. The six delegates who participated were truly fearless. The promotion for this year’s Miss USA’s pageant was well done. When you promote, you get ratings. And thank you also for choosing a weekday. Even though following the Oscars the night before was a tough thing to do, Miss USA did it with true style.

The intros were good but they needed captions. And they were introduced not once, but twice! Finally, a pageant where the focus was on the girls themselves rather than some neverending performance by some wannabe musicians. The sassy dancing from Burn the Floor really accentuated the Latin flair of the pageant in San Antonio. 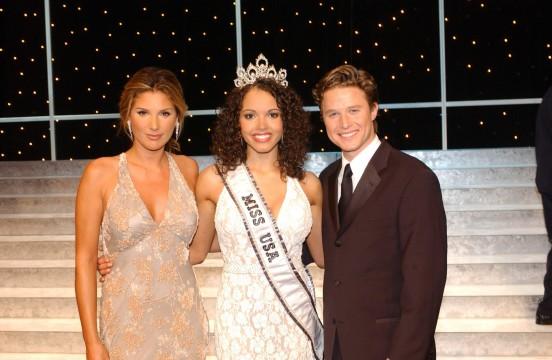 The hosts Billy Bush and Daisy Fuentes did a fine job. Of course, I’m partial to Daisy because I think she’s one of the best hosts the Miss Universe pageants have had. Access Hollywood’s Billy Bush is a newcomer and he also did a fine job. No complaints. It was great to dedicate the pageant to the troops overseas fighting the war in Iraq. The stage design was beautifully done. It was grander, bigger stage that just looked so elaborate and classy. Bringing Shauntay Hinton, the reigning Miss USA, back on stage at the beginning was an excellent idea. They did that when Sushmita Sen was Miss Universe and I always appreciate hearing a more casual speech about how the last year was. Shauntay was a great commentator and she was funny saying she remembers seeing her mom faint in slow motion when Shauntay won. And good work for Shauntay helping raise 34 million dollars for breast/ovarian cancer research. The judges did a good job. I was pleased to see Miss USA 1989, Gretchen Polhemus as one of the judges. As for the little touristy bits about San Antonio, I was expecting them. Hey, what’s a pageant without promotion?? It was done cleverly though, incorporating the delegates in most of the segments.

As for my predictions, I got 6 of the 10 plus 2 alternates and missed Hawaii and Oklahoma which were surprise inclusions to some people. As for my girls that didn’t make it, I honestly think California and Idaho were struck down due to the state hopper jinx. When I posted my final predictions, I made a special note of how in Miss Universe 2002, Miss Venezuela finished one spot ahead of Miss Germany (Natascha Borger who competed in Miss Venezuela but didn’t make the semis but then moved to Germany and won) and then Miss India finished one spot ahead of Miss Canada (Neelam Verma, a woman of East Indian descent.) That really made me suspicious and lo, and behold, Miss California, Candice Sanders was first runner up at Miss Tennessee twice before state hopping to California and winning and Miss Idaho, Lana Wright competed in Texas before getting the Idaho crown but California and Idaho, in spite of strong performances, didn’t make the semifinals at Miss USA but Tennessee and Texas did. Hmmm… California could have picked a better gown (the bright red didn’t really suit her). Idaho looked near perfect. No idea what happened there. Florida and Pennsylvania were also leggy model types like California but instead of my leggy supermodels, they went for smaller framed girls like Hawaii and Oklahoma. I noted that I loved Alabama’s interview and face but then I saw a hefty girl in preliminaries but I was pleased to see her make it because she really is lovely. Should it matter that her hips are a little wide? As for the home state girl Texas, Nicole O’Brian was first runner up at Miss Teen USA 2000 and then came back. In preliminaries, her hair was a disaster. I’m very glad her hair looked ten times better on finals night but that mother of the bride gown confused me and the way she said “my mom got cancer and now I’m at Miss USA” in her close-up was a real turn-off but she redeemed herself in the final competition. Also it was great to see former Teens that were so robbed at Miss Teen USA do well like Massachusetts, New Mexico and Indiana. The top 10 was well chosen and was actually quite diverse given the inclusions of Hawaii and Oklahoma.
Introductory walk with the Guy Rex Fashions blending modern fashion with an ethnic flair was a great opportunity for us to get to learn more about the delegates. 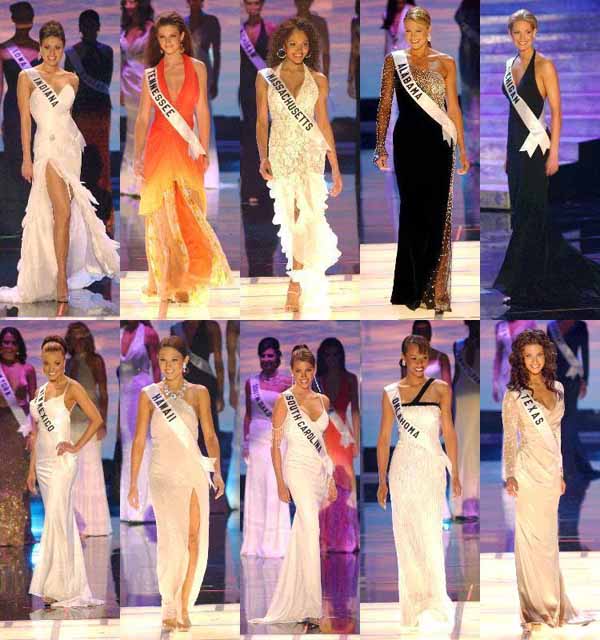 In the evening gown competition, the music was sensuous and dramatic and everyone really seemed to love it. Indiana’s gown with the feathery designs on the skirt was gorgeous with it sexy high slit and when she walked the skirt moved as if she was floating or airborne. Tennessee’s fiery number really caught a lot of eyes. The camera cut at a bad spot when she spun around just before she could show off how the skirt flared out. Beth worked it well. Massachusetts, of course, also worked her frilly white gown well with her lovely hair. Alabama’s gown was sexy but classy. The black covering was held together by a silvery net of sparkles revealing the naked left side of her body. The concept of the gown was very nice. Michigan looked lovely in her simple, dark, elegant gown but her legs didn’t quite look right when she walked. New Mexico also a simple, classy, elegant white gown and she had magnificent presence. Hawaii’s gown made her chest look small and her hips look big. South Carolina looked outstanding in her white gown. I would have liked to have seen the off shoulder jangles on both shoulders rather than one. Oklahoma had a gown with a black shoulder strap. It was a blah performance in a blah gown. Texas stepped out in her mother of the bride gown. It probably would have ranked low if another state was wearing it but her butt looked nice when she walked. 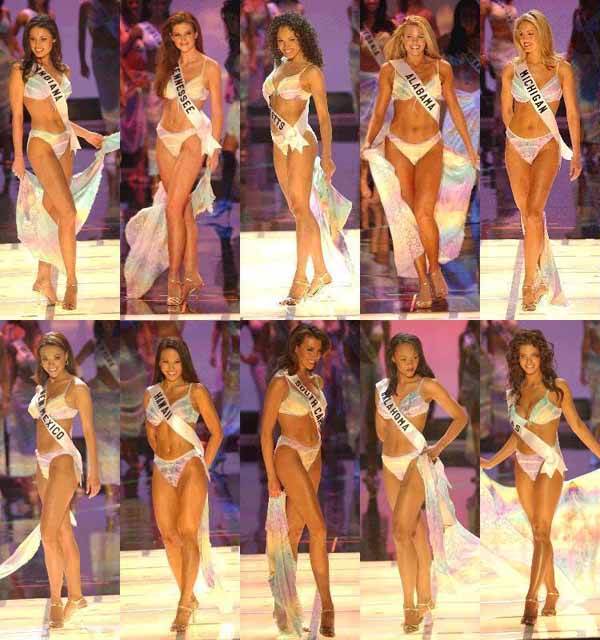 The up close and personal segment was great to be followed by swimsuits. Indiana was first and I immediately noticed many delegates seemed to be learning the art of the breast jiggle. Indiana was certainly one of them. Tennessee had eye makeup that was too dark with a body that could have used more of a tan but there’s no denying she had the moves and very nice waist tightening. Massachusetts looked so lovely when she walk and bounced her hair with every step and her turns were also very nice. A lot of the delegates have learned that you have to work it when you walk to be noticed. Alabama has a wider framed body especially the hips but she was about as fit as she could be. Her abs looked great. Michigan was the classic fresh blonde beauty. New Mexico really worked the overcoat and I loved it. Hawaii looked very confident in spite of her height. South Carolina had legs for days but the small waist/torso didn’t quite look right in proportion to her legs. Oklahoma was small framed and had flabby thighs. Texas’ hair and breasts bounced nicely when she walked. She did have a glow about her.
After judge Warren Sapp was mesmerized by the delegates on stage in swimsuits, Washington was congeniality and Minnesota won photogenic. The top 5 selections of Michigan, Massachusetts, Texas, Tennessee, and Alabama were fair. It was nice to have the casual talking with the delegates where we learned Michigan grew up next to dairy farm and milked cows and she thought the competition was pretty easy and then she said it was hard—a contradiction indicating nerves about questions being raised in her mind about what do the judges want to hear. Massachusetts’ grandmother had 19 children so there’s girl power in her Puerto Rican family. Texas loves food and has sushi dates with her dad. Tennessee volunteers with her elderly and at first did it because her mother made her but then she fell in love with non-profit work. Alabama says people in Alabama are not like those in the movie “Sweet Home Alabama” and she says there’s nothing like having your own bed. She also handled Billy Bush’s calling her Ala-bam-bam-bama and ‘Bama well. The way he said Ala-bam-bam-bama almost sounded too sexual. 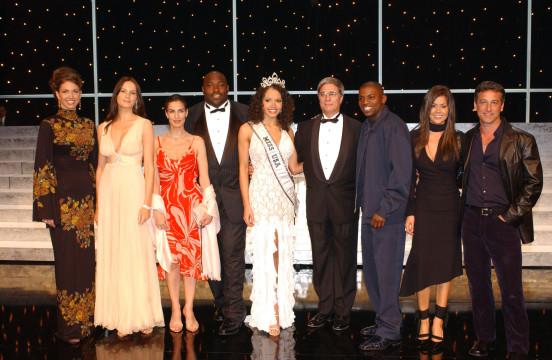 This year there was no final question, just picking questions written by another delegate. Michigan picked Shauntay Hinton’s question asking if the world is better now or as a child. Michigan said as a child you view the world as a great place to live and have fun. It was a fair answer. Massachusetts chose Alabama’s question asking what 3 things she would put in a time capsule to represent the 21st century. The Shawnae Jebbia (Miss USA 98) flashbacks were eerie. Both ladies were from Massachusetts (in fact, Susie was Massachusetts’ Teen titleholder when Shawnae won), both got the same final question and both didn’t give particularly outstanding answers, yet both won Miss USA! Susie said a cellphone, make up(???) and a computer. You could see the make up comment threw her a bit as if she thought to herself, ‘ Did I just say that?’ But she redeemed herself by saying especially the cellphone and computer could tell us about technology and how we’ve evolved. Texas got the inevitable war question posed from Michigan, “How do you feel about celebrities voicing their opinions about the war?” Nicole said celebrities have pull but it’s not good to go against the president or war and that we need to stand behind our president and have faith in our country and freedoms. This was an interesting question following Michael Moore’s anti-war comments on the Oscars. Tennessee picked Texas’ question which asked if she would rather be beautiful or wealthy. Beth said she would be beautiful because it has everything to do with what’s on the inside. I think the most honest answer to that question would be that you would rather be wealthy. Alabama picked Tennessee’s question which was do you think that a woman is unfulfilled if she does not have children? Practically all the questions sounded like they came from previous pageants but anyway Alabama gave a great answer which was that people define success differently and some choose to get married and have children and other choose college and a career so it depends on the individual’s goals and what their striving for in life that makes them successful. 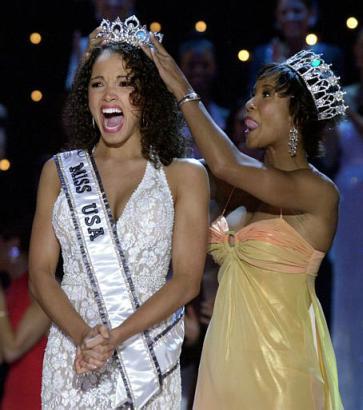 At the finale, Shauntay Hinton did her farewell walk working the cape on her gown. Tennessee was 4th runner up, Michigan was 3rd runner up, Texas was 2nd runner up. Well, at least Nicole didn’t react the same way she did when she didn’t get Miss Teen USA. Nicole O’Brian now joins Kelly Lloyd and Danielle Boatwright in the “always-a-runner-up-at-nationals” club. Some contestants seemed a little too ecstatic when Nicole didn’t win. Finally, Alabama was 1st runner up and the beautiful Susie Castillo of Massachusetts captured the new Miss USA crown. Susie’s such a sweetheart and I wish her success in the upcoming year. Susie will now be the 4th woman to compete in Miss Teen USA, Miss USA and Miss Universe. Ali Landry, Kimberly Pressler, and Lynnette Cole were the first three. Kimberly Pressler, however didn’t make the semifinals at Miss Teen USA and at Miss Universe. Susie also didn’t make the semifinals at Miss Teen USA, even though many people thought she should have but the same jinx shouldn’t happen to Susie. I think she’ll do quite well in Panama to compete for Miss Universe. 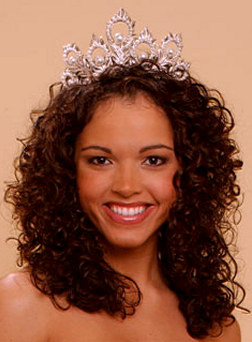