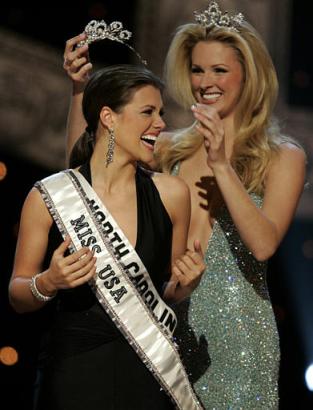 After DC's Sarah Elizabeth Langford captured the 3rd Miss Fear Factor title, we were whisked off to Baltimore, Maryland for the 2005 Miss USA pageant. The format of the pageant has pretty much stayed static since 2003 but since the pageant was in Baltimore, it would have been neat to see a theme based on the John Waters film "Hairspray" which has also gone Broadway. Having no musical guest this time around was also a plus considering that almost everybody fast-forwards them anyway.

As for this year's predictions, I got 8 semifinalists plus 4 alternates and 1 honorable mention which was okay. The two that I didn't put in my list were California and Michigan. Michigan didn't surprise me really because she was pretty strong from the beginning but I never expected California to do so well. Perhaps Keylee Sue Sanders, Miss Teen USA 1995 taking control of Miss California USA had something to do with it. So what about my girls that didn't make it? Well, Nebraska had a fantastic gown and body but her hair was kind of disappointing during prelims and then she straightened it for the finals night and I preferred the curls on her. Tennessee certainly had the body but had an oddly shaped nose and I think facial beauty is one factor that seems to be taken a little more seriously recently. Georgia had a great gown but I guess it wasn't enough. Alabama was strong this year but she had a bandage on her leg during preliminary swimsuits so that may have kept her out. Idaho was nice but I guess she didn't stand out enough. New Jersey delivered a good performance during prelims which surprised me so I thought she might have a chance but she just didn't make it as well as Arizona who had really captivating exotic looks and a nice, bold, flowy green gown but alas it was not to be. 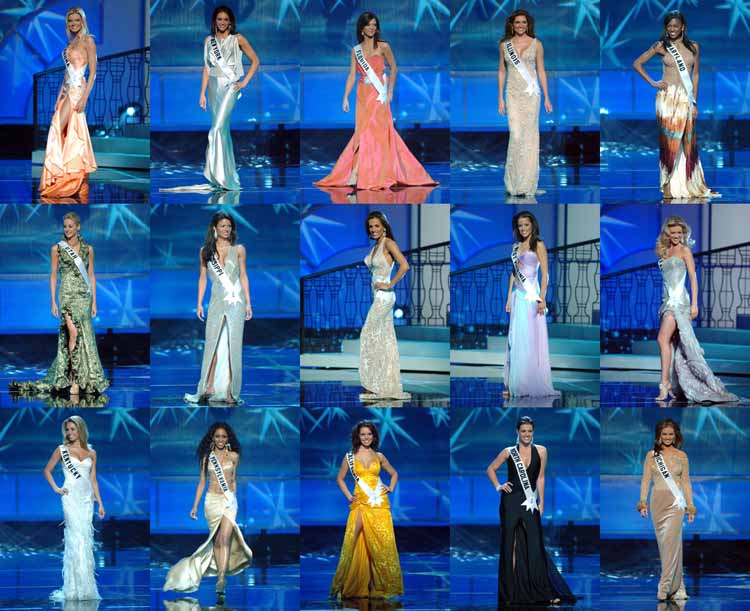 First off in the gowns we had Oklahoma wearing a nice orangy pink gown that went well with her skin tone, but I just can't believe that she's 18! New York had a mysterious, unique gown which looked like something that came out of ancient mythology. Her stunning face also certainly helped here. I didn't like Florida's flamingo taffeta number. Illinois had a classic gown but oh dear lord, someone please coach this girl how to walk in heels. Maryland just has a beautiful glow about her but she came out in a gown that looked like some stained art project and in spite of her aura, I would have liked richer tones of make-up. Utah's gown must have been inspired by reigning Miss Universe, Jennifer Hawkins and she certainly boosted the cleavage but the material somehow didn't look too hot. Mississippi had a very nice beautiful shimmery gown that caught the light nicely. Arkansas had a great choice of gown and she carried it well but I feel like this state for whatever reason seems to get denied repeatedly but at least she ended the ended Arkansas' 23 year drought in the semis since Terri Utley won in 1982. West Virginia's cotton candy gown was a little teen for the competition but I think she was a nice addition to the 15. Texas came out in a hideous take on one of the short gowns from 96 and I think these should have retired back then. This gown did nothing for Tyler. Kentucky was perfection-no ifs, ands or buts about it. Pennsylvania showed that daring sexy diva style that I loved with the infamous bra gown. She was hot and she knew it. California's yellow number looked like 70's curtains sewn together. North Carolina had a classic gorgeous black gown that forced you to notice her and the gown certainly helped her win the crown. Michigan started as an early favorite but this gown with the fur cuffs made her look stumpy.

The swimsuit competition was somewhat dizzying at times but we started off with Illinois who really showed her lack of ability to walk well on stage in heels. I thought her presentation was poor and she looked kind of hefty even though she was quite tall so overall, I was very surprised to see her advance to the top 5 after this. Kentucky's Kristen Johnson is simply angelic. Her fresh face, gorgeous hair, smile and body all made for an outstanding presentation. Mississippi had a really nice body that finely toned and tanned but I guess her implants looked a little evident. California clearly had the worst body of the top 10. Her body just didn't have an appealing shape to me and when she dropped her scarf so everyone else could trip on it and so she could feel herself up and draw attention to her boobs, well I was shocked that she advanced to top 5. Usually, I support fun, live-in-the-moment moves like this one but this just didn't impress me. Florida had a fine shape to her body. Pennsylvania's big hair and nice body really were outstanding. North Carolina looks nice but perhaps is a little stumpy. Oklahoma looked nice overall. New York almost tripped on California's fallen scarf but her body was pretty good. Maryland really had a sensational body and moves and I feel as though she was purposely eliminated at this stage of the competition because if she made top 5 being the homecrowd girl, she would have been hard to deny.

After Wisconsin won Congeniality and Texas won Photogenic, the top 5 consisting of CA, NC, FL, KY and IL moved on in the competition. I was very surprised about Illinois and California and found myself rather disturbed by this top 5 although my winner Kentucky was still in the running. The top 5 were asked some getting-to-know-you questions. California was asked about knowing sign language to she replied, "I'm sorry??" So that's why she learned the sign language. She just took a course on it and showed us how to say "thank you, very much". North Carolina talked about representing the U.S. to the president of Curacao to work on developing the plumbing and supplies necessary for building future children's hospitals. Florida talked of her company, Ampex granite which she started 1.5 years ago with the aid of her father and grandfather who are general contractors. Kentucky is the proud owner of a cow. She is not responsible for it since her generous grandfather takes care of her and she humorously stated that she had not milked the cow and doesn't plan to although if she was asked to milk the cow, she would try but didn't think it would be very pretty. If you thought Illinois performed poorly before, hearing her talk gave the audience the impression that she just wasn't all upstairs. She talked about being surrounded by alligators in Florida on a boat and that she wouldn't get off. Her ideal man is also sensitive, strong and can make her laugh.

Now to the final questions. California picked Kentucky's question asking if you could know one thing about your future, what would you like to know? If it was me, I would have quoted Brook Lee but she ended up doing an upped version of Kimberly Mais and carolina Izsak's answer. Brittany said she can't give an answer to that question because she doesn't want to know what her future holds. She likes living day to day, spontaneously and that's the spice of life and that if she was to know what would happen it would not make the moment as exciting as it is. North Carolina picked reigning Miss USA, Shandi Finnessey's question asking what famous person her personality most parallels? Chelsea chose Oprah because she has a passion for life, loves what she does and works hard to try to achieve everything in her life and even if she doesn't necessarily succeed at a goal, it's the journey that is the most important and she tries to emulate herself after that type of personality. Chelsea certainly demonstrated that she has great interview skills here. Florida picked California's question asking what has been her greatest challenge and what has she learned from it. Melissa's answer triggered echoes of Miss Curacao 1997, Verna Vasquez who also started a company, talked about it earlier in the competition and then repeated it during her round of judges' questions. Melissa referred back to starting her company and how she jumped into a male dominated industry so it was hard to jump into a business meeting and have them respect her but when she opens her mouth, she has done her research and knows what she's talking about and she knows women can be just as successful in that industry as men. After some pretty strong answers, Kentucky maintained her strength and answered Florida's question asking what she felt was the most challenging thing facing women her age. Kristen responded that it was definitely self-esteem issues. She has lived with women all throughout college and has seen this. She says we don't take enough time for ourselves since we've got the stresses of work, school and family and we really need to step back and take time for ourselves and realize that we're strong and we just need to relax a little bit. Finally, Illinois answers North Carolina's question asking what characteristics and actions come to mind when she thinks of a hero. Jill said she's generally a positive person so it would be someone who thinks positive and can give other praise and encouragement and not only think of themselves but think of other people and put people in front of themselves. And then she closed her answer mumblily. 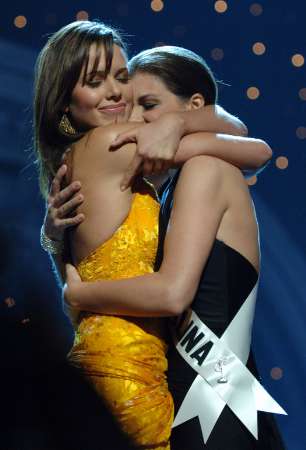 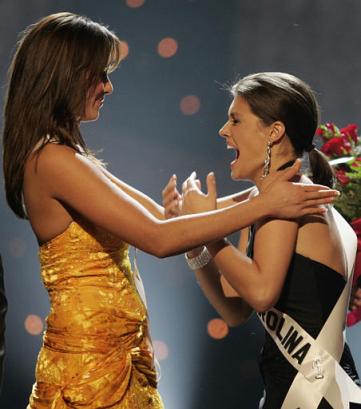 Finally, after the stunning goddess, Shandi Finnessey completed her reign as clearly one of the best Miss USAs in history, it was time to announce the results. I was so sure that the 4th runner up would be Illinois but I trembled to hear that it was Florida. Then I was a little frightened, then I heard Illinois announced as that 3rd runner up and then I was relieved and then I heard that my winner Kentucky was second runner up again, just like Miss Teen USA 2000 and I was extremely disappointed. Finally, after a strangling bear hug, I was relieved again to hear that California did not win and that Chelsea Cooley of North Carolina had won Miss USA 2005! So even though, Chelsea is a decent winner, I cannot emphasize enough how much of a loss it was for Kentucky's Kristen Johnson not to be crowned. North Carolina would have been my choice for runner up. After I watched the pageant, Access Hollywood did a feature showing Donald Trump's new bride stating before the competition that her picks prior to the competition were Florida and Illinois...and then Tom lets out a big Aha! Since both these ladies made it to top 5, I recalled Donald Trump saying that he would have experts on the preliminary judging panel during an E! True Hollywood Story interview since he was sick of better delegates getting left behind as others were chosen. If Melania is one of those "experts", I would reconsider the whole thing. In any case, at the end of the night, I had a massive headache probably from trying to figure out how California and Illinois made it as far as they did but overall Chelsea is a decent choice for Miss USA 2005. Until May 30, when we say "Sawadee" all over again just like in 1992 when we go to Bangkok, Thailand for Miss Universe. 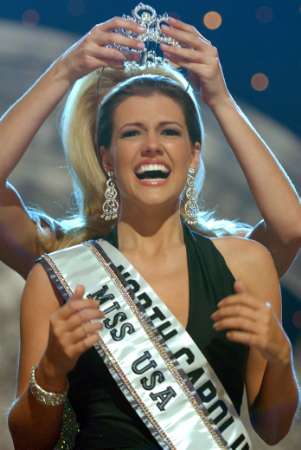 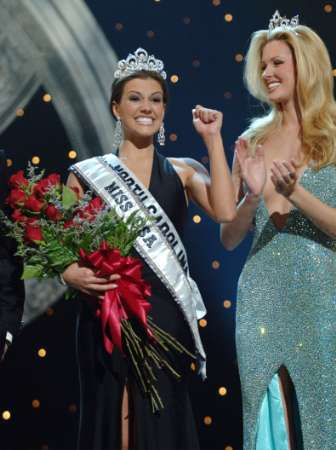